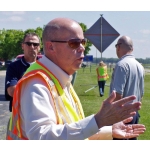 Did you know that there is one specific PowerPoint slide that contributed to the death of seven prominent Americans? Have you ever seen that one slide?  You probably have heard the term “Death by PowerPoint” but did you know there was a real life example?

As fire service personnel who are responsible for training other firefighters in various positions in their departments you have probably had the opportunity at some point to be assigned to teach a subject that is not one of your favorites and that is just not that interesting to most firefighters. There are some mandatory subjects that have to be taught every year because of some rule, regulation or directive that just doesn’t reflect the day to day activity of most of your students. Or it just might be a subject that requires a classroom environment instead of hands-on training with your apparatus, tools and equipment. I refer to them as “Unsexy Firefighter Training Topics” or UFTTs.

A recent unscientific survey identified the following classes as examples of UFTTs:

I’ve had to sit through some of those classes myself during my time as an active firefighter and fire officer. Those UFTT classroom sessions are frequently accompanied by PowerPoint slides full of text. That’s where the term “Death by PowerPoint” originated. My topic for the 2019 ISFSI Fall Instructor Development Conference is about various strategies and tactics you can use to teach those UFTTs that all of us encounter at some point in our career. I might not be an expert in this subject, but I have learned a lot by teaching plenty of unsexy training classes as part of my full time career job as a Certified Safety Professional for 40+ years.

Along the way in my role as a safety and fire protection consultant I dealt with lots of different codes, standards and regulations as I tried to advise my clients on how to develop safer workplaces for their employees and how to protect buildings and facilities from fire, flood and other hazards. One function of that job required me to teach safety classes for employees of client companies. Many of those safety classes were about Occupational Safety Health Administration (OSHA) regulations or various National Fire Protection Association (NFPA) standards related to various fire protection subjects.

Here are some of the things I learned the hard way:

Preparation is Critical for Success

The most important thing I learned was how to prepare for a successful training event. If you already know your subject inside out, great! But what about those subjects you might get assigned that you don’t know well? The internet provides us with loads of information about almost every topic you can imagine……and some you never even knew existed. In the early days of my career there was no internet! No Google! No smartphones with answers at my fingertips almost anywhere! As a matter of fact there weren’t any cell phones yet! It’s a wonder my generation ever survived! I had to rely on trade periodicals, text books, encyclopedias, libraries, and get this – real people who were experts in specific subjects! I had to rely on the telephone to reach out to people I didn’t know to ask for help or guidance. I got their phone numbers from phone books or from friends and/or business associates. I can’t think of any calls where people simply refused to help. They might not have known the answer to my specific questions but they often could suggest someone else to call who knew more than they did about specific subjects. My network of people from all over the world built and maintained over 47 years is still my most valuable resource tool. Build your network and use it to research the subject you have been assigned to teach. Remember to verify information you pull from the internet. Contrary to popular belief just because you found it on the internet doesn’t mean it’s accurate or even true. Know your “stuff” because today’s students fact check you in real time and will call you out if your information isn’t accurate.

Consider the fact that your audience might not be in your class of their own choosing. Many of the OSHA classes I‘ve had to teach were considered mandatory by someone in the organization who most often was not in the classroom themselves. As an OSHA Outreach Instructor I have taught the often dreaded 30-Hour OSHA General Industry class to workers who were told to attend the 4.5 day training without any real explanation about why they needed to attend. One of the first questions that came up often is “If this class is so important for our company why isn’t my boss in this class?” I don’t have a standard answer for that question. “Because I said so!” might work for my offspring, but it’s not acceptable in the business world or the fire department. My answer to that question is always customized for that specific group of workers and it is based on the frequency and severity of worker injuries and/or specific hazardous conditions I have observed in their facility or operations. That’s right, I spend time in their operation observing and talking to the workers and in some cases actually doing specific troublesome tasks to fully understand what’s involved. I learn the lingo and jargon used by the workers and I listen to their stories about how someone got injured or how a piece of equipment was damaged in an operation. I use that information to explain why we are all in the classroom and that it is to help them identify ways to make their job safer and prevent similar injuries or equipment damage. I use examples of how some of their fellow workers were injured and how those injuries have affected their personal lives and the lives of their families and co-workers. Personal experience and stories go a long way in helping to answer the question – Why?

A powerful tool for instructors is storytelling. I’m not referring to “war stories” that generally help fill up a time slot and that might be entertaining, but stories that help illustrate a teaching point as part of your training class. How you tell that story is important also. In my experience stories accompanied by photos, video or other visual aids tend to stick in people’s memory more than stories without visual aids. Firefighters are great story tellers! The fire service has great stories that have been passed down through the ages. The best and most memorable stories are generally the ones that are connected in some way to the firefighters in the room. Stories based on people they know, apparatus they use, fires they have worked and training sessions they have experienced are usually the most memorable and are often repeated for the benefit of others. In my world dealing with firefighter and worker safety, stories of events that have changed the way we do things have great impact. As some of you know I have spent years trying to tackle the hazard of roadway incident safety for firefighters and EMTs. The story that I tell that got me involved in that subject is about 8 firefighters and two EMTs who were struck by an out-of-control tractor trailer on the PA Turnpike while they were working a “routine” motor vehicle crash in 1998. One of those firefighters, Dave Good, did not get to go home that day and died in the line of duty while the other nine personnel were injured and transported to a hospital. To this day that is still the largest number of firefighters to be involved in one “struck-by” incident and I hope that record is never surpassed or matched ever again. That story is personal for me. Not because I was at the scene (I was not!) but because I knew and had worked with all of those personnel and in fact had helped to train FF Good as part of my duties as a Lieutenant and FD Safety Officer in that fire department prior to my retirement from active service. To this day that event haunts me because to some extent I wonder if I missed something in our training at that time that might have prevented that outcome. Photos of the incident scene make that story more memorable for learners who attend one of my training sessions. Chances are that some of you reading this article have heard that story somewhere, from someone. It’s now a part of a national training program designed to improve roadway incident safety for all disciplines.

I mentioned “Death by PowerPoint” at the beginning of this article. I happen to like PowerPoint and use it frequently. I have some slides with text and bullet points but the majority of my programs use mostly photos, drawings and video clips to illustrate specific training points and to provide a memorable bookmark for learners about certain lessons. PowerPoint by itself is not evil and in fact can be a very useful tool.

Remember that one slide I mentioned at the beginning of this article that contributed to the death of seven prominent Americans? It was one slide in a 28 slide program used by Boeing Corporation engineers to explain to NASA officials the results of three reports from an investigation into a mishap on a space shuttle flight in 2003. The NASA officials were trying to evaluate the significance of a piece of foam that broke off during launch and struck and damaged a heat resistant tile on the exterior of the shuttle. That one slide looked like this: 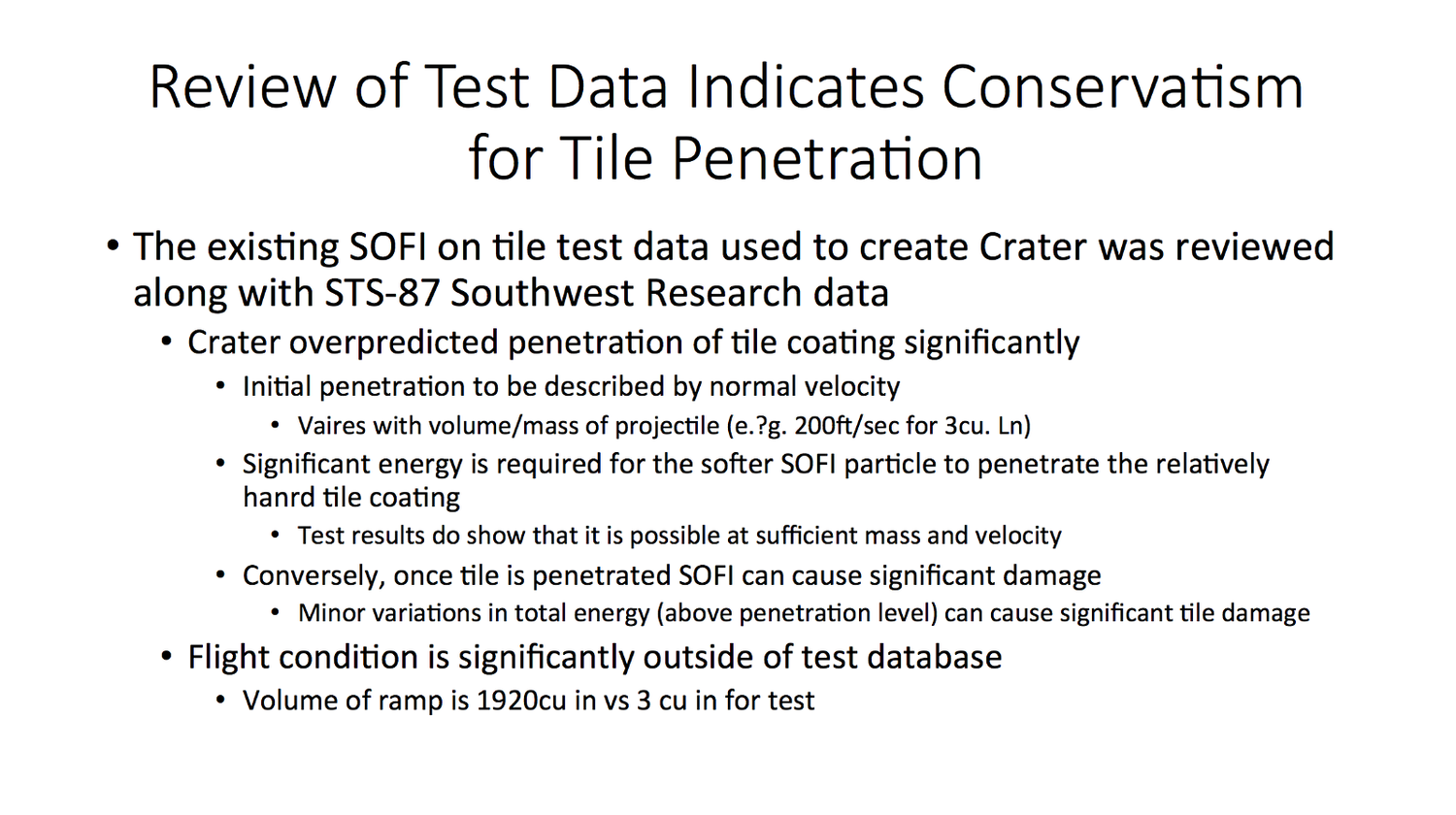 The content and design of that one PowerPoint slide and the explanation provided by the Boeing engineers in a joint meeting led to a decision by NASA officials to allow the space shuttle Columbia to reenter the earth’s atmosphere on the morning of February 1, 2003. During reentry that day instruments registered excessive temperatures on the shuttle’s surface that quickly caused the space craft to disintegrate killing all seven astronauts on board. You can read the full story and explanation at the credited source.

If you want to be successful at teaching UFTTs, prepare by studying your subject, figure out how to answer the question “why” and use stories from personal and relevant experience to help the students remember significant training points. Plan to join me at the 2019 ISFSI Fall Instructor Development Conference to discuss many other ways to tackle "UnSexy" Firefighter Safety Topics!

As an instructor, what message are you sending to newly appointed members? Are you setting them up for success? Are you clearly outlining what they have gotten themselves into and how to manage their ...
The Power of NFPA 1403; Protecting Our Most Valuable Training

In the fire service we tend to line up on either side of an issue then dig in, fight the good fight, and ensure our position prevails. In the last century nothing was more controversial than nozzles. ...
How Good Policies Support A Culture of Trust in the Fire Service

As I read a line-of-duty-death report recently, two statements jumped off the page. First, the report concluded that “General Orders are often contradictory, unclear, or too cumbersome for perso...